Updated from the original published in WildBird magazine (2008). 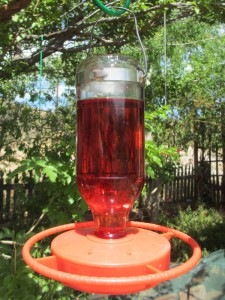 The sugar water in this feeder is colored with a couple of teaspoons of natural cherry juice concentrate, not synthetic dyes.

Decades ago, when hummingbird feeders were made from plain glass vials or bottles, a little red coloring was often added to the sugar water to attract the birds’ attention. A tradition was born, and though modern commercial feeders are proven attractive without additional color in the contents, to many people a hummingbird feeder just doesn’t look right unless it’s filled with red liquid.

Hummingbird experts have long discouraged the used of colored feeder solutions as unnatural and unnecessary, but there was little more than anecdotal evidence to suggest how synthetic dyes might affect the birds’ health. Now studies on humans, lab animals, and even cell cultures are providing that evidence without turning the hummingbirds themselves into “guinea pigs.”

Some of the recent research into dyes and other food additives was spurred by the concerns of parents who suspected that these chemicals were linked to the increasing incidence of childhood maladies such as attention-deficit/hyperactivity disorder (ADHD), asthma, and allergies. One of the prime suspects was FD&C Red No. 40 (allura red), an azo (coal-tar) dye used in the liquid food coloring found in millions of kitchens as well as in many prepared foods and beverages. In 2007, British researchers at the University of Southampton reported that Red No. 40 was among several popular food colorings that increased hyperactivity and reduced attention span in children when combined with the common food preservative sodium benzoate. These results validated previous studies as well as the experiences of many parents and teachers. Some European manufacturers responded by pledging to eliminate Red No. 40 and other suspect additives from candy, soft drinks, and similar products.

Though less well publicized than the Southampton study, earlier research also casts doubt on the safety of Red No. 40. In 2001 and 2002, researchers in Japan reported that Red No. 40 at doses as low as 10 milligrams of dye per kilogram of body weight induced DNA damage in the colons of mice. DNA damage is the first step in transforming a normal cell into a cancer cell. In a 1983 study, American researchers found that high doses of Red No. 40 administered to adult rats and their offspring resulted in “significantly reduced reproductive success, parental and offspring weight, brain weight, [and] survival” as well as behavioral abnormalities. Though the U.S. Food and Drug Administration approved its use over twenty years ago, there is enough uncertainty about the safety of Red No. 40 that it is banned in Austria, Belgium, Denmark, France, Germany, Sweden, and Switzerland.

Another food dye under scrutiny is FD&C Red No. 3 (erythrosine), also found in liquid food coloring and often added to feeder solutions. In 1990, the FDA banned certain uses of Red No. 3 in response to a study that found that large doses of this dye cause thyroid tumors in male rats. Subsequent research has identified estrogen-mimicking effects of the dye on human breast cancer cells and linked high doses to reduced sperm production and behavioral changes in lab animals. (Neither Red No. 3 nor Red No. 40 should be confused with the infamous Red No.2, which was banned in the U.S. in 1976.)

What are the implications of this research for hummingbirds and the people who love and feed them? The most alarming aspect of these studies is that many of the harmful effects were dose dependent: The larger the dosage of dye, the greater the effect. A hummingbird the size of a Black-chinned needs to drink about two and a half times its body weight in 4:1 sugar water to meet its daily energy needs. If that sugar water was dyed bright red with Red No. 40, the bird would take in ten times the daily dosage of dye that it took to produce DNA damage in the Japanese studies. A hummingbird coping with cold temperatures or fattening for migration might need to drink twice as much sugar water per day, thereby doubling its dye intake.

The research into Red No. 40 also solves the mystery of why hummingbirds produce urine paler in color than the dyed sugar water they drink. Some of the dye is absorbed and chemically altered by the body, but an unpublished 1970 study found that a significant amount adhered to the intestinal lining of the test subjects. This may explain why the later Japanese study found the dye’s damage concentrated in the cells of the gut wall.

Not surprisingly, concern over the effects of artificial dyes on human health have sparked new interest in natural colorants for foods and beverages. Fruit, vegetable, and flower extracts are seldom as uniform in color or stable under as wide a range of environmental conditions as their synthetic counterparts, but research is underway to resolve some of these issues. Until plant-based food dyes become widely available, dye-free cherry, raspberry, or other fruit juice concentrate makes a safe and simple alternative for coloring hummingbird feeder solutions.