The fall migration of Ruby-throated Hummingbirds

What’s “wrong” with this picture? 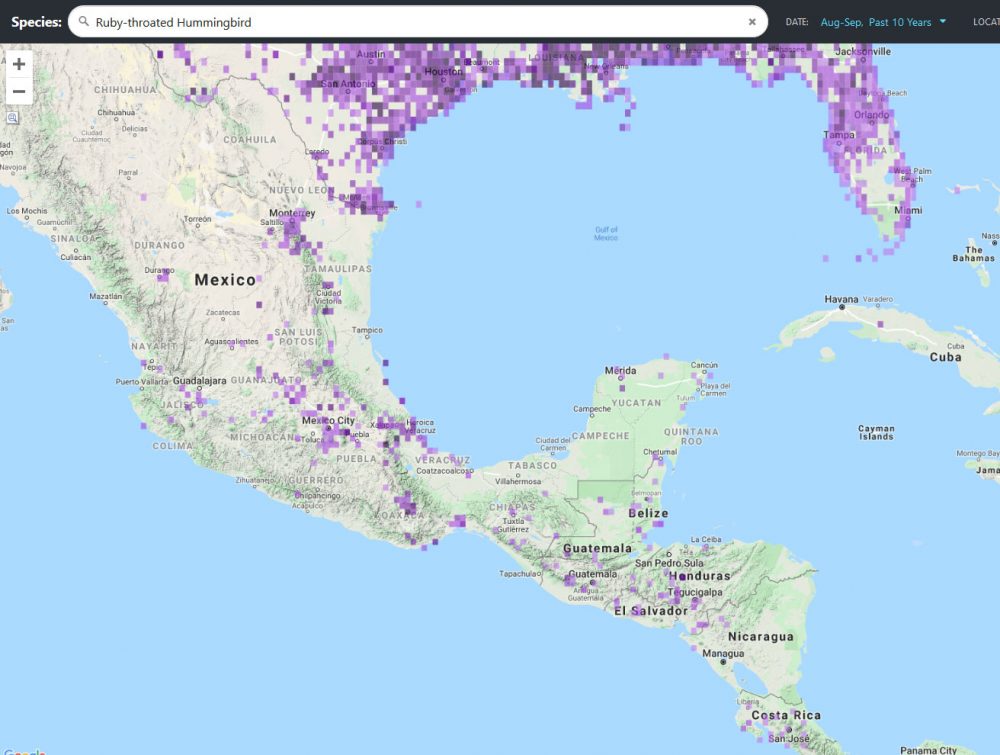 In this map from eBird, each of the purple squares represents sightings of one or more Ruby-throated Hummingbirds reported during the peak of fall migration (August-September) over the last 10 years. The darker the purple, the more reports of Ruby-throated Hummingbirds from those blocks. Though the U.S. has many more eBird contributors, certain parts of Mexico and Central America, including major population centers and tourist destinations, get at least some birding coverage. That accounts for much of the uneven distribution of purple squares on this map, but there’s something more troubling about it.

According to conventional wisdom, Ruby-throated Hummingbirds cross the Gulf of Mexico in fall migration, heading from the southern coast of the U.S. to the Yucatan Peninsula and then south into Central America (note the purple squares in Costa Rica, a major wintering area for the species). Considering the huge concentrations of southbound Ruby-throateds along the northern and western Gulf Coast in September, resident and visiting birders in the Yucatan Peninsula could hardly miss seeing these trans-Gulf migrants after they make landfall. That is what’s “wrong” with this picture: There are only a handful of light to medium purple squares in the Yucatan region.

Why aren’t there more and darker squares? It’s not that there aren’t enough birders in the Yucatan Peninsula and even out in the Gulf itself in August and September. In the map detail below, the gray, blue-gray, and green-gray squares indicate August-September checklists that didn’t include any Ruby-throated Hummingbirds: 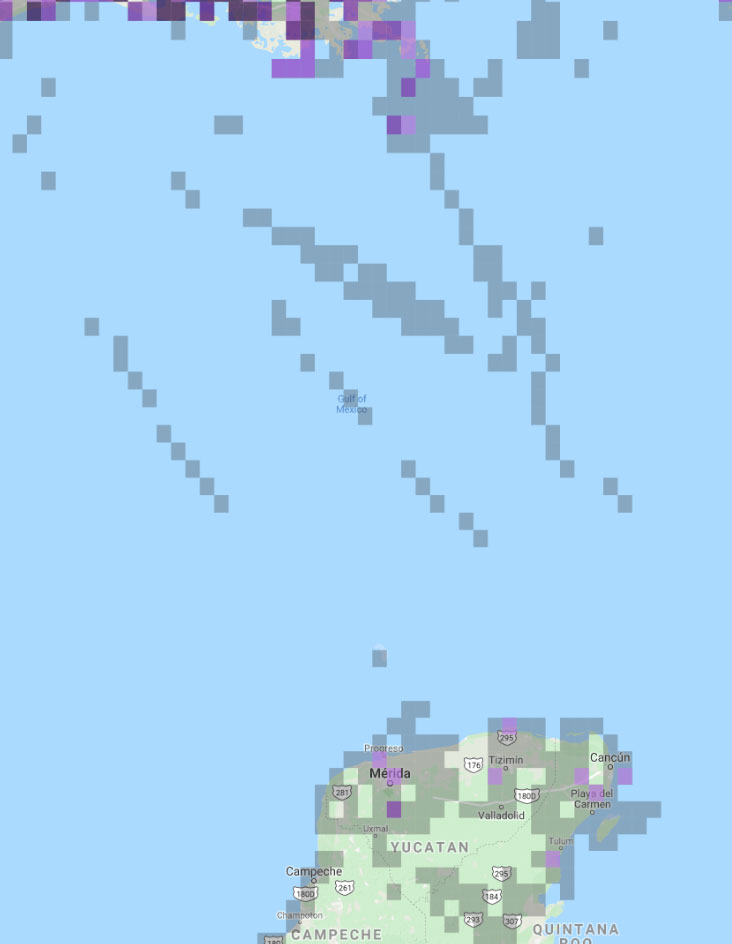 eBird map detail showing locations of August-September checklists with no Ruby-throated Hummingbirds reported; the Mississippi River delta is at the top, the Yucatan Peninsula at the bottom.

There are gray squares covering most of the northern peninsula as well as a few out in the Gulf representing boats and offshore oil and gas platforms, popular resting spots for exhausted migrants. If tens of thousands of Ruby-throated Hummingbirds were crossing from the southern U.S. to the Yucatan Peninsula in August and September, more people should be seeing (and reporting) them along their routes and when they reach land. The inevitable conclusion is that they’re just not there, at least not in numbers big enough to get noticed.

The trans-Gulf migration of Ruby-throated Hummingbirds has a powerful hold on our imaginations. Millions of other birds of dozens of other species make the same journey, but none so tiny and seemingly fragile as the Ruby-throated. The basic fact of this feat—that birds smaller than your thumb can and do cross more than 500 miles of open ocean—has become a matter of hummingbird dogma, leading to the overgeneralization that the trans-Gulf route is equally important in both spring and fall migration (a few people believe that all Ruby-throated Hummingbirds cross the Gulf in both directions). Even many hummingbird researchers have embraced the image of tens of thousands of southbound Ruby-throateds striking out across the Gulf as though it was established scientific fact. It’s not.

Despite hedging on the issue in the first edition of A Field Guide to Hummingbirds of North America, I’ve long been skeptical of the importance of trans-Gulf migration to southbound Ruby-throateds. The main reason is geography. The Yucatan Peninsula may be a convenient launching point for birds headed north from Central America, but this narrow wedge of land would be a tricky target for southbound birds. A migrant whose course is off by just a few degrees east would end up out over the open Caribbean, with few dots of land for rest and refuge. A westward drift could add more than 200 miles to the journey, severely testing the limits of the birds’ endurance and fuel storage.

The other reason is weather. Fall is hurricane season, and storms traversing the Gulf present not only a formidable barrier to migrants intending to cross from the U.S. to the Yucatan Peninsula but energy-saving tailwinds for birds taking a westerly route around the Gulf. This animated satellite image of Hurricane Harvey as it made landfall on the Texas coast shows how a storm like this blocks the routes of trans-Gulf migrants while its counterclockwise winds provide a boost to circum-Gulf migrants:

If the embedded video won’t play for you, you should be able to view it here: Ruby-throated Hummingbird Abundance Animation

Additional support for the importance of circum-Gulf routes to southbound Ruby-throated Hummingbirds comes from a recent research project on the Alabama coast (Zenzal 2016 and 2018; summary). The study found that juvenile Ruby-throateds use overland routes around the Gulf rather than crossing it, and that departure timing from stopover sites was correlated with wind direction, with a significant preference for winds from the east rather than the north. Adults were rarely encountered at the study’s coastal site, leading the researcher to speculate that experienced migrants took off across the Gulf from points farther inland. Given the scarcity of Yucatan sightings on the eBird maps, it’s far more plausible that the vast majority of adult Ruby-throateds are also taking overland routes, though apparently farther inland than inexperienced juveniles.

There’s more than one way across (and around) the Gulf

This doesn’t mean that Ruby-throated Hummingbirds don’t cross parts of the Gulf in fall migration, just that they may be doing it differently than most people imagine. In a study of migrating birds on and around offshore oil and gas platforms in the northern Gulf of Mexico (PDF; Table 9.3), detections of Ruby-throateds in fall had a distinct western bias, with two platforms off the central and southern Texas coast accounting for 58% of the sightings. The scattering of sightings on eastern platforms near the delta of the Mississippi River may represent a few birds that actually did strike out for the Yucatan Peninsula, but the birds detected further west were at least as likely to have been cutting across the northwestern Gulf on a southwesterly trajectory toward southern Texas and northeastern Mexico.

There’s also a second circum-Gulf route that almost no one talks about. It involves a shorter ocean crossing with the potential for multiple stopovers, and it may be a safer and more expedient route to Central America for Ruby-throateds from the Atlantic region. The southern tip of Florida is only about 475 miles from the nearest point on the Yucatan Peninsula, compared to over 550 miles from the Mississippi Delta, over 600 miles from Fort Morgan, Alabama, and over 640 miles from Rockport, Texas. Cuba sits between, providing a convenient place for less fit birds to rest and refuel. The first fall sightings of Ruby-throated Hummingbirds in southeastern Mexico are often on the northeastern tip of the Yucatan Peninsula, suggestive of birds that took the eastern circum-Gulf route.

It’s only within the last few years that we finally have enough evidence from enough sources to address the question of whether Ruby-throated Hummingbirds follow similar migratory routes in spring and fall. Citizen science projects such as eBird, research such as the two studies cited above, and re-encounters with banded birds are all contributing to a clearer picture of migration, which in turn helps us to understand how we can help them survive and thrive in an increasingly hostile world. Ensuring a future for Ruby-throated Hummingbirds and millions of other migrants will require international cooperation to preserve and manage critical stopover habitats around the entire Gulf of Mexico. Understanding when and how birds are using the landscapes they encounter in their travels helps us prioritize these conservation efforts where it will do the most good.

Zenzal, T.J. Jr. 2018. Migratory hummingbirds make their own rules: the decision to resume migration along a barrier. Animal Behaviour 137.